For me, Taipei would be the city most exciting to live in Taiwan as of today (things are changing - other cities are building more public transits and becoming more modern and travel-friendly). For the four years I studied at NTU, there were always things to do: exploring restaurants, hanging out at the night markets (NTU Gongguan/NTNU/Xinyi/Shilin/Danshui), Daan park, concerts, musicals, hiking in Tianmu etc. I come back to Taipei almost every time back in Taiwan, the MRT makes it so easy to go around! This time (January 2015) a new line is added and few lines are extended, and each line is called by number instead of the name of its destination. Definitely easier for non-Mandarin speakers, though I seem to associate those lines with color.

This time we spent three and half days in Taipei. Arrived Thursday evening after driving back from Kenting to Taichung. Sunset at Taichung HSR was pretty and fast :) 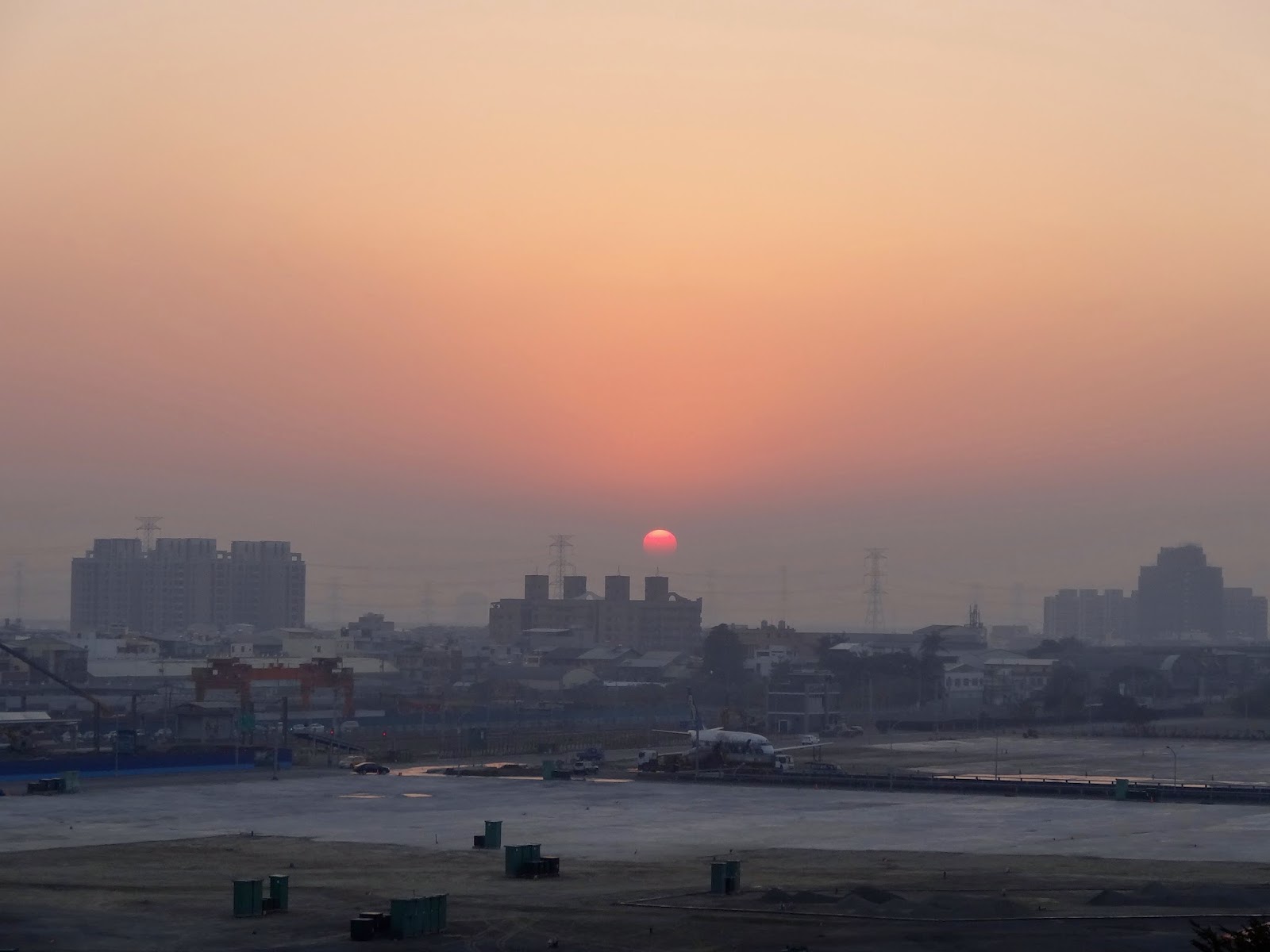 We stayed at RF hotel at 忠孝敦化 (Zhongxiao Dunhua), small place but served its purpose. There was one card for the elevator access and room electricity and a key for the door, I lost the card and had to pay for the fee but the breakfast was pretty nice. The front desk is on the third floor of a building (Rolex on 1F and 聚粵軒 on 2F). We missed it the first time since the light was not lit up, and almost thought we got scammed lol.

I've been craving for their fried rice for the longest time. This well known place is famous for its XLB, but I'd say their fried rice is hidden gem. I was actually a bit disappointed at the shrimp fried rice, it was not exactly like the last time I had it last year but still pretty good. We also got 5 classic pork and 5 melon & shrimp soup dumplings. The pork was the best.

Service was overwhelming. They had a number system with groups of different sizes, the wait for 2 was like nonexistent on a Friday night with quite some people outside. The highlight was: Tycho, a musician from SF, was dining there. (Verified by checking his tour schedule, he was having a concert the next day!)
We went to the lively Ximen for this all you can eat BBQ. As the name suggested, the restaurant was like a classroom with a chalk board and those nostalgic dark wood tables and chairs back in schools. Each grill had ventilation above, pretty convenient and considerate. The staff were all BBQ professionals, they helped us now and then with grilling and tips. The selection was about 5-6 items per meat and seafood, and a few more for veggies (mushroom, tofu etc.); they also had salads and soup/plain rice. In the end we got marshmallow on the grill, sooo soft <3 the girl next table saw this and dropped her iPhone to the garbage bin lol.

We ordered beef, pork, hot chicken wings, scallops, clams & melons, tofu, tuna in soup rice, Japanese style salad, mushroom (different kinds). Didn't get shrimp because we just went shrimp fishing and had a shrimp feast the previous night.
We were on a dessert hunt late at night after shrimp fishing, and this place was right by Sun Yat-sen memorial hall MRT. It was the togo mango ice place on Yongkang Street, and they moved and rebranded. Shaved snow was my favorite kind of ice dessert, unfortunately it was winter and mango/pineapple were summer fruits. We got this strawberry shaved snow instead: 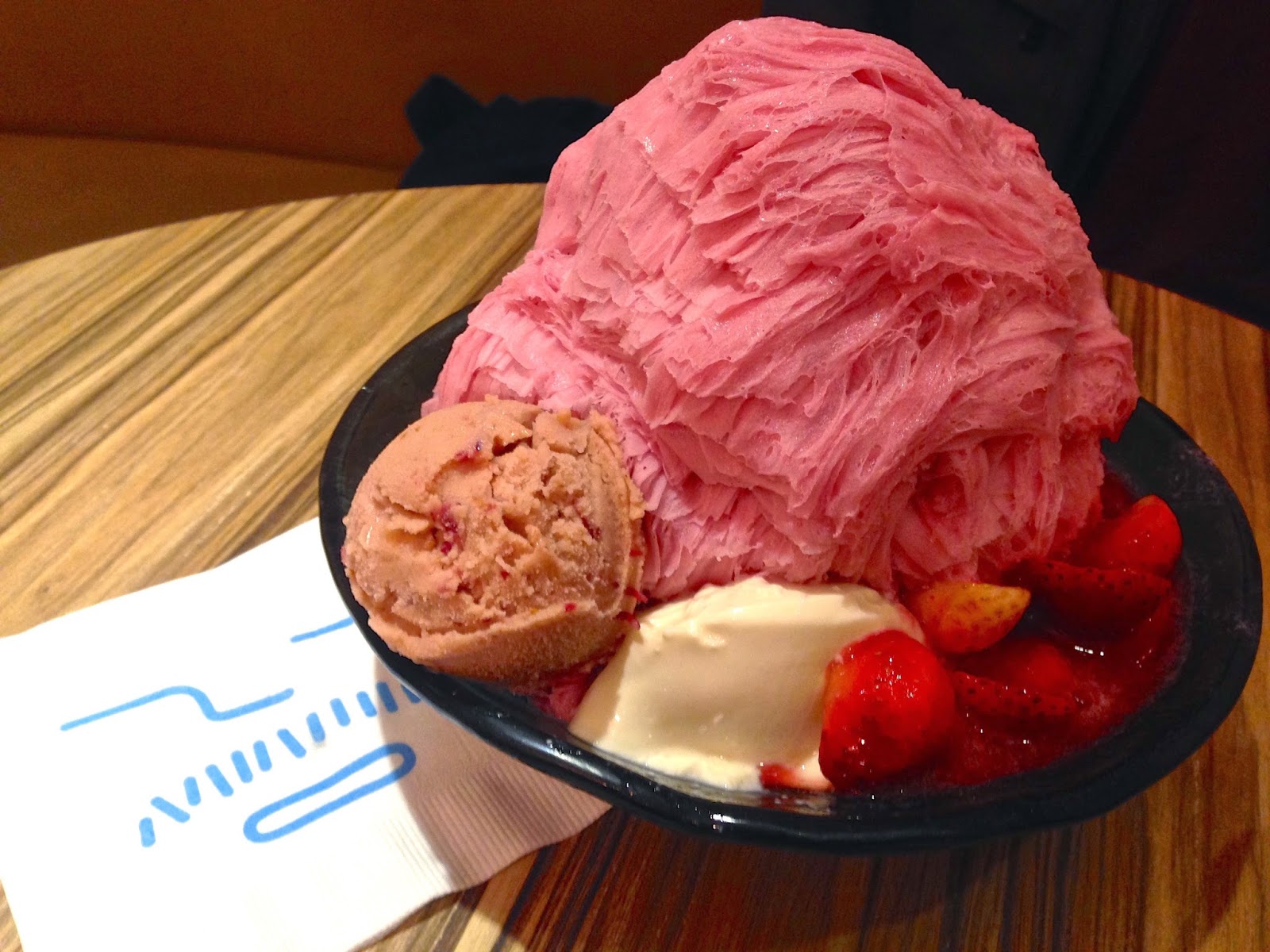 The portion was so big, we didn't get to finish this bowl of strawberry yums. There were strawberry flavored shaved snow, ice cream, real strawberry slices, and the milk pudding. About NTD 250 for this huge bowl.

We went to a few night markets in Taipei and Keelung and got a bunch of traditional street food. 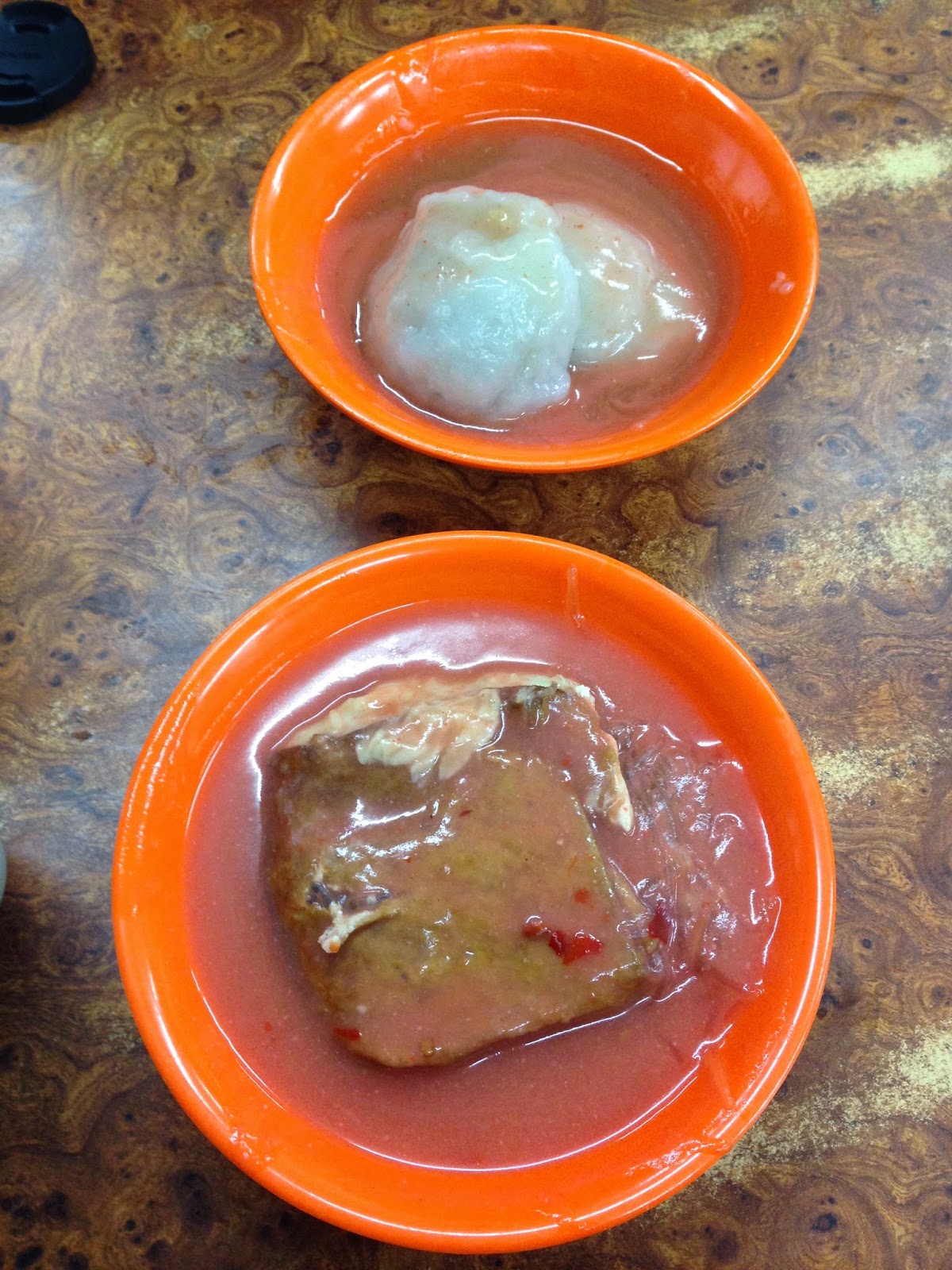 Only in Taiwan. Probably the highlight of this trip. Sounded like a ridiculous idea to fish in this pond, where a box of shrimp were thrown into the pool every hour or so. We accidentally came to this place 春城釣蝦場 (ipeen). It was pretty empty when we came in around 8pm on a Friday, but it started filling up later. The staff were very friendly to us shrimp fishing first timers, teaching us the basics. Charge was $350/hour. The shrimp net (where we gathered the shrimp we caught) came with 3 shrimp. The bait was little dry shrimp, which was amusing. Shrimp eat shrimp?

The friendly stuff told us to wait for 10 seconds after the indicator sunk and before pulling out the fishing rod. It was probably one of the most satisfying things when I caught something :D. The shrimp twitched so much after getting caught on the fishing rod, I got intimidated every time. The staff told us to get rid of their front feet first, so that they wouldn't hurt. We got 7 shrimp in total, pretty exciting! We then just grilled them, and ate on the table with a Taiwan beer and grass jelly drink.

The shrimp were 泰國蝦 giant river prawns, they apparently dyed the water green so that people and shrimp wouldn't see each other. Wouldn't be much fun if people could see them, and shrimp would be scared if they see us.

More people came in later, some with their own equipments. It was my first time fishing, it could take a while like ten minutes of sitting there. But the setup made it much easier than normal fishing (they dumped a box every hour), also the grilling part was fun. Could also pay them like NTD 100 to have them cook the shrimp. The staff were nice, I felt like they helped us a lot and were happy to see us catching things. You know, they didn't have to care about us getting anything. 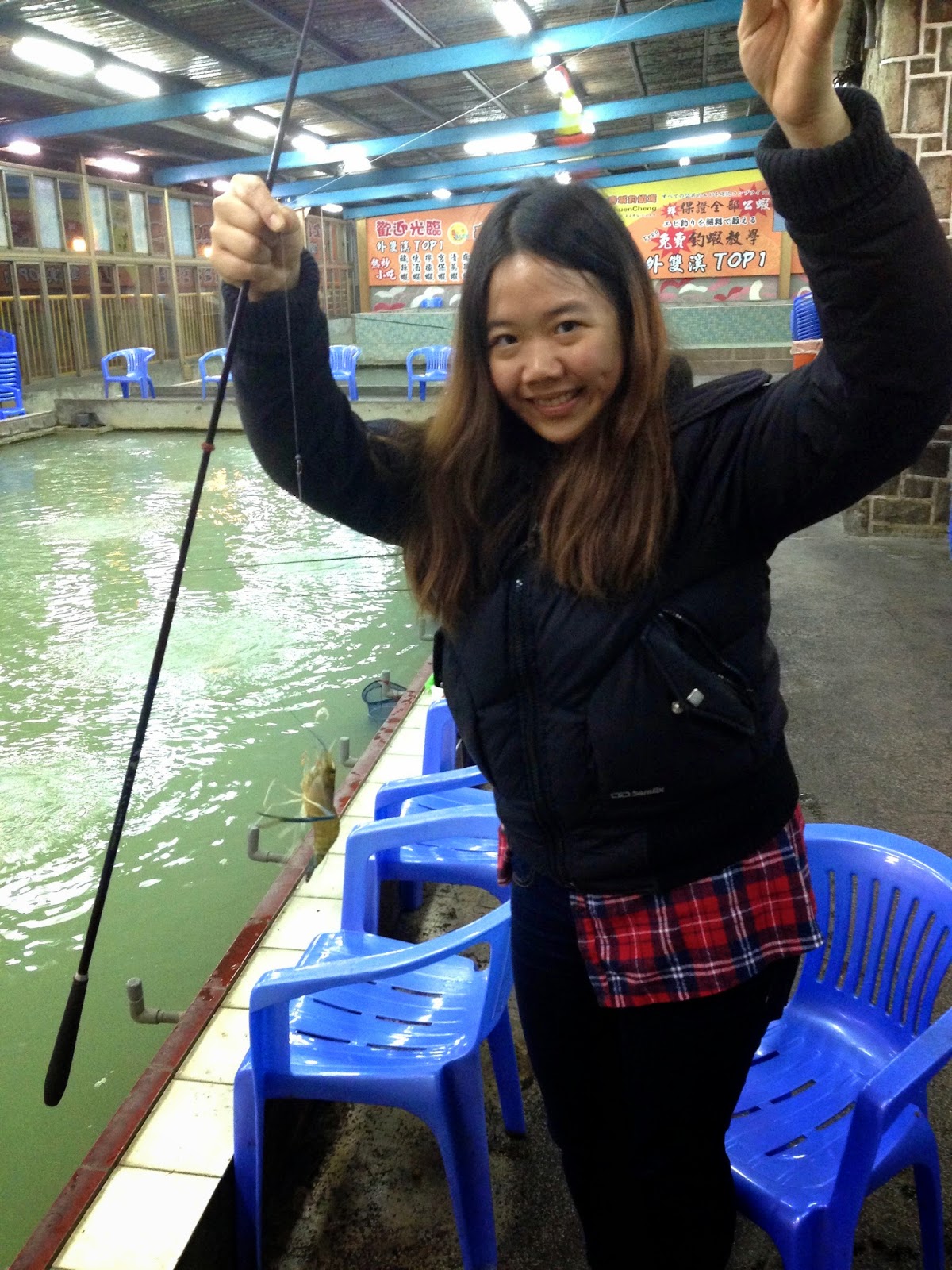 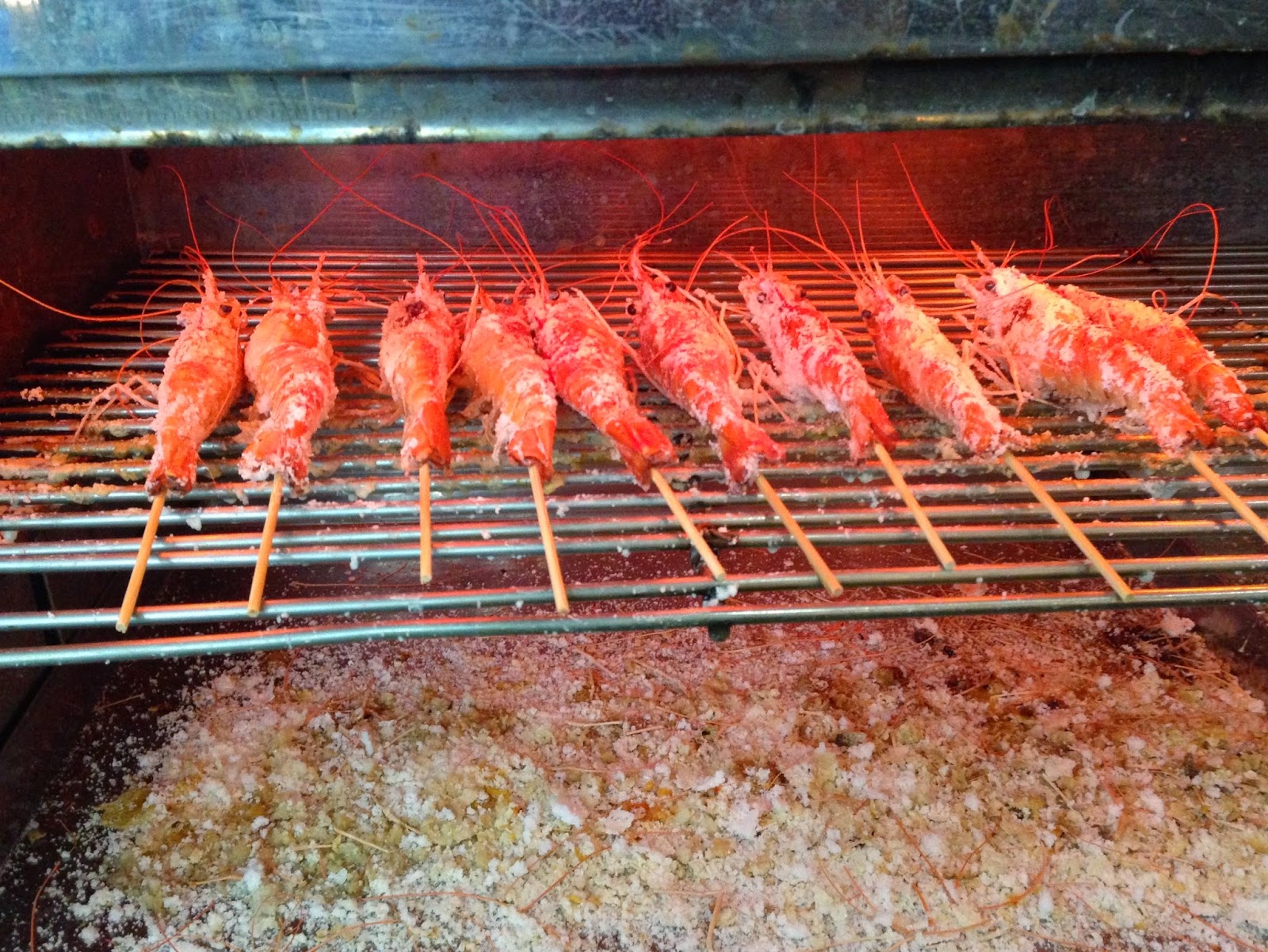 These shrimp were still twitching while being grilled.

I'd say shrimp fishing is a fun thing to do, great place to hang out and most likely easier than nature fishing. We wished they had this kind of thing in the US. Would love to do it again next time! I told my parents about fishing as a family gathering, my dad was up for it since he did it before, but mom wasn't interested because it was tough for her to see shrimp being killed. Well, I guess people would eat the same amount of shrimp no matter what.